Batman: Hush is the fourteenth installment in the DC Animated Movie Universe. It was released on Digital July 20, 2019 and 4K Ultra HD, BLU-RAY, and DVD on August 6, 2019. Voice cast for the film was leaked on 2 January revealing it to be part of the universe.[1] While it’s the fourth Batman film in the DCAMU, the film isn’t a sequel to Batman: Bad Blood, but instead to Reign of the Supermen.

The mysterious villain known as Hush is determined to destroy both the crime-fighting career and personal life of Batman, which is already complicated by his relationship with Catwoman.

Bruce Wayne is attending an evening party where he meets Selina Kyle and his childhood friend and renowned brain surgeon Thomas Elliot, until he receives an alert from Alfred about a child kidnapping from Bane. After a brief fight, Batman is confronted by Lady Shiva who tells him an unknown intruder has used the Lazarus Pit and asks for his assistance in identifying them. Batman rescues the child but Catwoman steals the ransom money. As Batman swings through Gotham City in pursuit of her, a mysterious villain shoots his grapple line and he falls to the ground, fracturing his skull. He’s nearly killed by a group of nearby criminals until he’s saved by Catwoman and Batgirl. Catwoman delivers the ransom money to Poison Ivy, who’s controlling her through a hypnotic kiss.

Alfred summons Thomas Elliot to remove skull fragments from Bruce's brain. Batman recovers and pays a trip to Blackgate Prison to interrogate Bane on the whereabouts of the money. Bane eventually escapes, and Batman strikes a deal with Amanda Waller, who allows Bane's escape so Batman can track him. Bane leads Batman to Poison Ivy's now abandoned greenhouse where Catwoman is. Waller captures Bane and returns him to prison.

Catwoman, seeking retaliation for Ivy's manipulation, offers information on her whereabouts to Batman in exchange for a kiss and a tenuous romance blooms between them. Batman and Catwoman follow Poison Ivy to Metropolis. Batman finds Lex Luthor, now a probationary member of the Justice League, and asks for information on a delivery list of an ethylene compound to track down Ivy's location. There they find Ivy has taken control of Superman and she commands the Man of Steel to kill Batman and Catwoman. Batman observes that Superman’s subconsciously resisting Ivy's influence, holding back on his attempts to kill both of them. Using knuckledusters made from Kryptonite, Batman stalls Superman while Catwoman lets Lois Lane fall from the Daily Planet building. Superman breaks free of Ivy's control to save Lois. Batman, Superman, and Catwoman work together to capture Ivy, who reveals that she was being manipulated by a mysterious foe called Hush.

Bruce Wayne goes on a date with Selina, who’s unaware of the former's identity as Batman, much to the encouragement of his family. The two, along with Thomas Elliot, attend an opera when Harley Quinn arrives and attempts to kill Bruce. In the ensuing struggle, Dr. Elliot is apparently shot dead by the Joker. An enraged Batman violently beats Joker who claims that he’s innocent, and he’s stopped short of killing him by James Gordon. Bruce attends Elliot's funeral and deduces Joker's innocence as well that Hush must know his secret identity.

After foiling a robbery by the Riddler, Batman chases after Hush but fails to catch him. Afraid for her safety, Batman asks Selina to leave Gotham so she doesn't fall victim to Hush, who vowed to murder everyone close to him. He eventually decides to trust Catwoman and reveals his identity to her, and the two become a romantic crime-fighting couple. Later, Batman investigates the office of Thomas Elliot and discovers one of his patients was someone called Arthur Wynne who sought an operation for an inoperable brain tumor. Nightwing and Catwoman investigate a graveyard break-in and are attacked by the Scarecrow. Nightwing is overpowered by the fear toxin but Catwoman defeats Scarecrow and gets Nightwing to safety. However, she’s captured by Hush after Nightwing escapes.

At Arkham Asylum, Batman interrogates Riddler who reveals that he’s been Arthur Wynne as well as Hush. He’d used a Lazarus Pit to cure himself of his brain tumor and during his time in the pit, he figured out Batman's identity as Bruce Wayne and formed a plan involving several villains to destroy both the personal life and the crime-fighting career of Batman. Batman deduces that Riddler is actually Clayface mimicking his identity while the latter communicated via satellite. After defeating Clayface, Batman finds Riddler's location and the two engage in a final confrontation. Riddler is nearly killed but is saved by Batman with his grapnel. However, Catwoman cuts the line and allows Riddler to fall to his death.

In the aftermath, Batman and Catwoman decide to go their separate ways after a fierce disagreement over Batman's ethical code. Both of them acknowledge that while their relationship can’t happen presently, it may someday.

"Like the view? It's the only thing you'll catch tonight."

"The only drawback is he just won't shut up about his feelings."

"We've done this dance for so long."

The Bat and the Cat sharing a kiss

Batman and Catwoman Sharing a Kiss

"God you're hot when you smash stuff."

"None of this is my fault! He made me control Superman."

"This just gets better and better."

"I know he needs your help."

"Pennyworth tells me you're romantically involved with a criminal now?"

"Knock me over with a feather, Bruce Wayne mixing with the swells."

Abrupt Ending to a Chase Between a Bat and a Cat 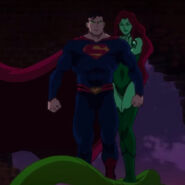 "Is Batman your new boy toy? I have one too."

Joker gets punch by Batman.

Batman and Catwoman escape from explosions.

Catwoman takes Nightwing into the Batmobile.

Hush reveal his face as "Riddler".

Catwoman and Nightwing in the Batmobile.

Bruce and Selina after sex.

Batman and Catwoman vs. Penguin

Batman and Catwoman vs. Two-Face

Bruce and Selina showering together.

Bruce and Selina at morning breakfast.

"Was that really necessary?" "YES."

"What do you know about my pudding!?"

"Maybe someday. But not today."

Poison Ivy on the throne

Nightwing, Alfred and Batgirl patch up Bruce for medic

Nightwing introduce himself to Selina Kyle

"Stay away from her!"

Alfred looks away from Bruce and Selina in hot shower

"Stop me if you heard this one."

"Are those from Mwah." 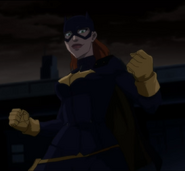 "A few days ago I suffered a loss, it's been suggested I'm handling it better because I have you in my life."

"Oh I can think a few things."

"What is it the theatre folks say? Break a face!"

"I just got my retractable claws. Coast a small fortune."

"You're going back to Arkham, Ivy."

"All unites, we have a break in to the Gotham City Cematary."

"May I have a question for you. You can ask."

Batman and Catwoman vs. Mr. Freeze