Avatar of the House of Mystery

Colleen Villard
Black Orchid depicted as a manifestation of the House of Mystery's magical aura with a desire to experience human nature.

At some point, the magic of the House of Mystery wanted to experience humanity and gave itself a body. It took the name Black Orchid.

After Constantine was paid a visit by Batman, Zatanna, and Deadman, Orchid appeared right next to him. Constantine was startled, as usual, and scolded it for not using a door like he told it to. Zatanna got the wrong idea and Constantine quickly explained what Orchid was. Deadman and Zatanna agreed it sure gave itself a body. Orchid replied it was glad to see he was well. Orchid immediately inspected the guests. It observed Deadman was a spirit whose existence was not its own like itself. She was interested and took his hand. Deadman was at a loss for words, for once. Orchid walked to Zatanna next and observed she was powerful in true magic and was angry at Constantine yet still had feelings for him. Orchid understood the anger. Zatanna remarked she could kill him. Lastly, Orchid walked to Batman and noticed he exuded pain. She observed his life was a patchwork of blackness with no time for joy. Orchid asked how he coped with that. He answered he had a butler.

As part of his plans to reconfigure the Dreamstone, Ritchie Simpson nearly died of his ailment and was brought to the House of Mystery where a shard was being kept. Simpson was placed on a bed then Orchid put a hand on his chest. It glowed blue and he grunted. Constantine conjured an image of the ring he saw the perpetrator of the global supernatural epidemic wore and told Orchid to make sure Simpson saw that when he woke up. Orchid corrected him and noted it would if he did. Simpson woke up while Jason Blood told the others his origins and connection to the Dreamstone. Orchid informed them. Simpson framed Felix Faust as the culprit. They attempted to figure out a way to locate Faust, but Orchid reported that Simpson was slipping from the mortal plane. Constantine told it to keep Simpson alive and safe. Orchid objected and stated that was not its purpose. Constantine didn't care and clarified those were his orders and added to help Simpson any and every way it was able to. Orchid stared at Constantine.

While Constantine, Batman, Zatanna, Etrigan, and Deadman battled Faust, Simpson made his move. Once Orchid turned its back, Simpson reached for his cane and exposed the small shard of the Dreamstone atop it. He pressed his palm over it. Orchid jumped at him but was frozen in mid-air then her attacks failed to complete. Simpson reminded Orchid it was ordered to do everything to help him by the master of the House. He ordered Orchid to take him to the main room. Wishing it out of his way, Simpson ordered Orchid to walk into the fireplace. Orchid complied and stood in the fireplace as its body melted away down to the bone. Simpson took control of the House and prepared to reform the Dreamstone. By the time Constantine and the others returned, Destiny took control of Simpson's body and materialized then blew up the House of Mystery. A few days after Destiny was killed again, Jason Blood was laid to rest near his birthplace. The House of Mystery reformed itself and Orchid greeted Constantine and Zatanna with two mugs of beer. Orchid walked away from the door but returned when Deadman was just about to fly away. He flew into the House then the door closed and it vanished.

Summoned by John Constantine, Black Orchid used the House of Mystery to destroy one of Darkseid's towers on Earth. Later, alongside Shazam, Steel, and Superboy, she fought against the Paradooms genetic hybrids of Parademons and Doomsday, but was vaporized by one of the Paradooms' heat vision. 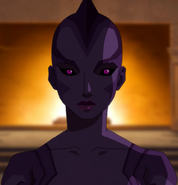