Constantine: City of Demons is the twelfth installment in the DC Animated Movie Universe and a sequel to the events of Justice League Dark. It was originally developed as a web series comprising of five episodes that are 6-7 minutes long. [1] After being released on the CW Seed streaming service, Constantine: City of Demons was later compiled into a feature-length film that was made available on Blu-ray and digital on October 9, 2018. [2]

A decade after a tragic mistake, family man Chas and occult detective John Constantine set out to cure Chas’s daughter Trish from a mysterious supernatural coma. With the help of the enigmatic Nightmare Nurse, the influential Queen of Angels, and brutal Aztec God Mictlantecuhtli, the pair just might have a chance at outsmarting the demon Beroul to save Trish’s soul. In a world of shadows and dark magic, not everything is what it seems, and there’s always a price to pay. The path to redemption is never easy, and if Constantine is to succeed, he must navigate through the dark urban underbelly of Los Angeles, outwit the most cunning spawns of hell, and come face to face with arch-nemesis Nergal—all while battling his own inner demons! [3]

John Constantine awakes from a dream of whispers from around the world. He finds himself in his apartment surrounded by miniature trench-cloaked projections of his inner demons. They attack John, who then uses magic to absorb the demons back into his subconscious. He is visited by his old friend, Chas Chandler, whom he has not seen in a decade. Chas asks John to help his daughter Trish, who has unexpectedly fallen into a coma, which Chas suspects to be the result of dark magic. John uses magic on Trish and discovers that her aura is tainted. He summons Asa, the Nightmares Nurse, to help pinpoint a diagnosis but Asa cannot find Trish's soul. Trish is briefly able to communicate through Asa before a demonic entity takes over and gives John an address. As John and Chas travel to Los Angeles to get Trish's soul back, Asa and Chas' wife Renee stay with Trish. Asa magically compels Renee to tell the story of Newcastle that John will not talk about. Renee reveals that John and Chas had been best friends since they were kids and even formed a band together as young adults. When they found out that their mentor Alex Logue was using his daughter Astra to enact a dark spell below his Newcastle night club, John, having practiced occultism since he was a boy, attempted to save Astra by conjuring a real demon. The demon Nergal killed Alex and his followers, but also slaughtered the club-goers and took Astra with him to Hell. His trauma regarding the incident even lead him to be committed to a psychiatric institute. However, Renee does not remember sharing this information with Asa. John has a dream of the worldwide whispers again and suspects that someone is messing with his mind. Chas drives them to the address and they are greeted at a mansion by an anthropomorphic pig butler. Inside the mansion, John stumbles upon a pool of decaying corpses before the monstrous demon Beroul presents himself. The demon reveals that his soul-snatching scheme was just a ploy to enlist John's services. Beroul reveals that he intends to create his own branch of Hell, but needs John to eliminate his demon competitors. After surviving being chased on the road by demonic dogs and being saved by an apparently possessed driver, John meets with Beroul again, who reveals himself to be Nergal, and that he is behind the plague of coma victims. The demon forces John to aid him by showing that he has Trish's soul trapped inside his body. Afterwards, John meets Angela, the collective consciousness of Los Angeles, who had been following John ever since he arrived by possessing various people, including the driver that rescued him. Seducing him, she admits that she unleashed his inner demons as a test, and tells him that she will not allow demons of despair to poison a city of hope. Returning to Chas, John admits that he doesn't have the power to defeat Nergal's enemies on his own. He then hatches a plan. He first entices the Aztec death god Mictlantecuhtli to attack the demons for him. He then lures the demons to an unconsecrated church by promising to hand over Nergal, traps them inside with holy water, and allows the god and demons to fight each other, then finishes off the victorious god with a spell. Returning to the hospital, John summons Nergal. He attempts a bluff: cutting Nergal off from his wards, harassing him with the inner Constantine demons, and opening all of the gates between Hell and Los Angeles, leaving Nergal with 5000 competitors to face instead of 5. Nergal calls John's bluff, forcing him to use his fallback plan: the Camdever Curse. Unleashing all of Trish's and Renee's love for Chas blasts the demon apart, since Trish's soul is locked inside him. This frees the girl, saves the coma victims, and destroys the demon. But later, at a diner, John reveals to Chas that love was the sacrifice that powered the curse: Trish and Renee will never again remember Chas, and, further, Chas will not remember John. Angela appears in the form of an old man, thanks John, and promises to take care of Chas. John heads off to return to London, with one surviving inner demon to keep him company. 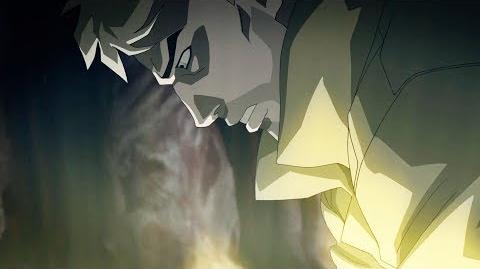