Geoffrey Arend
Edward Nygma aka the Riddler/Hush was a supervillain and a major enemy of Batman.

Some time before the events of Batman: Hush, Edward Nygma had received a terminal diagnoses due to a brain tumor. His doctor, Thomas Elliot, attempted a surgery to remove the tumor, but failed. Undeterred, Nygma secretly used a Lazarus Pit to restore his health, as well as granting him enhanced abilities.

During the events of the Hush saga, the Riddler was first seen robbing a bank, supposedly set up by Hush to be caught by Batman.

However, it was revealed that the Riddler Batman caught was a decoy, with Clayface posing as Nygma while the real Riddler remained at large, and had adopted a new persona, Hush.

Nygma apparently perished during a fight with Batman and Catwoman, due to multiple explosions inside a chemical facility.

The Riddler is shown to have an extreme inferiority complex and deep insecurity, constantly seeking to prove himself a worthy villain to other villains and Batman. He attempts to use his intelligence and knowledge of riddles to outwit Batman and show his worthiness as an adversary. However, they all dismiss him and consider him a C-list villain not worthy enough to be considered a threat, much to his annoyance.

After using the Lazarus pit to cure his brain tumor, the Riddler has a sudden change in personality, becoming more malevolent and hateful towards those who wronged him and never took him seriously. He blackmails and outsmarts his fellow supervillains and even forces dangerous adversaries like the Joker to be merely a pawn in his revenge against Batman.

Despite having established himself as a formidable foe and nearly brining Batman to his knees, the Riddler is still haunted by his deep insecurities. During their final confrontation, the Riddler is easily provoked and angered by Batman, who taunts and insults the Riddler by calling his villain act a joke and a gimmick that even a fifth grader could do. His lack of composure proves to be his ultimate downfall, as he begins to lose focus during his fight with Batman, resorting to wild and violent swings that Batman easily exploits and counters. As the fight went on, Batman also played mind tricks to feed into the Riddler's self doubt and insecurity. At one point the Batman tells the Riddler he could probably feel the effects of the Lazarus pit wearing off. Whether or not his claim was true, the Riddler became more desperate to end their confrontation before possibly losing his newly granted power. Although he became more analytical and calculating after using the Lazarus pit, he gradually became more violent, unhinged and sloppy when facing difficulty and the power of the Lazarus pit could not cure his insecurities. 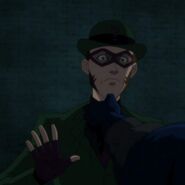