Harley Quinn
Yo-Yo (only in Flashpoint)

"If you're happy and you know it, smash a head."
—Harley Singing[src]

Harleen Quinzel, better known as Harley Quinn, was an enemy of Batman, and the Joker's lover and sidekick. At some point, she was apprehended and placed in the Suicide Squad on Amanda Waller's orders.

After the Flash made the Flashpoint Universe, Batman was battling Harley (Currently as Yo-Yo) for answers to try and find the Joker's location. She refused to tell him, then admitting she didn't know, and it wouldn't help him much even if she did. Batman tossed her off the roof, luckily to be caught by Cyborg before hitting the ground and dying, and willingly surrenders.

In Gotham City, Professor Pyg is kidnapped by Scandal Savage and Knockout for a "patient in need of medical attention". Amanda Waller discovers that she’s diagnosed with a terminal illness and reassembles Task Force X with a new roster: Deadshot, Harley Quinn, Captain Boomerang, Killer Frost, Copperhead, and Bronze Tiger. Their mission: to find a man named Steel Maxum and retrieve a mystical black card emblazoned "Get Out of Hell Free."[1]

Finding Maxum in a male strip club, Task Force X is interrupted by Eobard Thawne, Silver Banshee, and Blockbuster, who appear to want the card for themselves. The squad escapes with Maxum and learn he was Doctor Fate. He explains that the card allows the user to bypass Hell and gain access to Heaven, but it can only be used once. Scandal Savage and Knockout stole the card from the Tower of Fate, which resulted in Maxum being stripped of his title by Nabu.[1]

Upon finding Scandal and Knockout's apartment, the team acquires the card, but they’re intercepted by Vandal Savage and his men. Savage retrieves the card but leaves the wounded Knockout to die despite Scandal's pleas. As Savage escapes, Zoom places a tracer on his ship.[1]

The next day, Zoom's henchmen kidnap Frost at a gas station. Zoom removes Frost's bomb and convinces her to join him. Zoom lures the Squad into a trap and detonates the bomb. They manage to escape, but Tiger is heavily injured in the blast.[1]

Scandal covertly informs Deadshot of Vandal's location, and the Squad infiltrates his lair but are captured. Savage reveals that he had Pyg surgically implant the card into his chest cavity. Zoom and his henchmen attack and remove the card from Savage's body, killing him. Zoom explains that he was killed by Batman in another timeline, but managed to stay alive by calling on the Speed Force. Frost double-crosses Zoom, killing Silver Banshee and Blockbuster and stealing the card for ransom. Copperhead fights Frost until Waller detonates his bomb and kills both of them. Captain Boomerang attempts to steal the card but is incapacitated by Zoom. Tiger battles Zoom, but Zoom slices him multiple times with a small dagger. Tiger, dying from blood loss, uses the last of his strength to cut the card from Zoom's fingers. Deadshot kills Zoom and gives the card to Tiger, who dies and ascends to Heaven. With only Captain Boomerang and Harley Quinn remaining alive in his team, Deadshot gives the now-useless card to the unsuspecting Waller before leaving.[1]

Bruce Wayne and Selina Kyle are on a date at the opera, when Harley appears on stage and knocks out the performer to address the audience, where she announces that she and her henchmen are there to rob everyone in attendance and for her to kill Bruce Wayne. She tries to shoot him numerous times but he evades her long enough for Selina to slip away and for Catwoman to attack her. Their fight takes them up to the rafters where Harley drops a lighting fixture on Selina's head, knocking her down, but Batman catches her before she hits the stage below. Harley, seeing the display, states her personal disgust before escaping through a fire exit.

Two years after the Justice League's failed invasion of Apokolips and deaths of the Teen Titans, Harley is seen on Stryker's Island in Metropolis, now the leader of the Suicide Squad which was led by Amanda Waller before her death due to cancer. Harley is seen in a boxing match with Lois Lane, attempting to win her over to their side. Despite her use of electrical gauntlets, she’s defeated by Lois Lane, and decides to keep her end of the deal, declaring that Earth will be reclaimed. Harley then reveals that due to Batman, Joker had also died shortly after Waller. Harley, along with the rest of her team, join the remaining Justice League's efforts in destroying Apokolips, accompanying them to LexCorp to fight their way to the boom tube.

After fighting through many of LexCorp's soldiers, the Suicide Squad, along with Lex Luthor and Lois Lane, remain by the boom tube as the remaining League members head to Apokolips, in order to prevent the Paradooms from returning to Apokolips. To fight off the Paradooms, genetic hybrids of Parademons and Doomsday, Harley is given new guns infused with Kryptonite ammunition, as the Parademons are vulnerable to Kryptonite due to possessing Superman's DNA.

When the Suicide Squad is vastly outnumbered by the Paradooms, Luthor erects a barrier made of Kryptonite around the group as he triggers LexCorp's self-destruct sequence. Eventually, the barrier is broken, and the remaining members of the Suicide Squad, along with Lane, are killed as the building self-destructs, also killing the surrounding Paradooms, but not before Harley gleefully continues to shoot at the enemies around her and expresses her excitement in reuniting with Joker.

Harleen’s hair was in the trademark twin ponytails tied by two black and red hair ties. She has blue eyes, and she wears red lipstick and blue and pink eyeshadow.

Her outfit consists of a checked tank top, which exposed her midriff and navel, as well as a loose black glove on her left hand, and a loose red glove on her right hand, with a black diamond pattern on the right and a red diamond pattern on the left, along with blue shorts and stockings that have one red side and one black side. She also wears a black sneaker on her right foot, and a red sneaker on her left foot. She also wears a black choker with studs.

Harley wore her original black and red jester outfit that was the same from the DC animated universe, except her sleeves aren't attached to her clothes. She wore a tight-fitting, red and black jumpsuit. The two colors are separate but complimenting throughout the outfit, with dividing color lines running down her chest and waist. One of Harley's boots is red—the other is black—and she has diamond patterns on her hips and shoulders. In addition to white cuffs and a white collar, her face is also a very white color, using make-up. To help conceal her identity, Harley Quinn wears a black stylized domino mask. She wears a red and black jester hat with two bells dangling on either side. 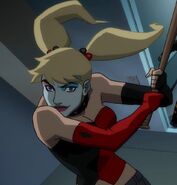