Travis Willingham
The Heretic was a member of the League of Assassins and a clone of Damian Wayne, son of Batman and Talia al Ghul, artificially aged and genetically enhanced by the latter to be a perfected version of Damian. It is shown that he desires Damian's memories of being a child and Talia's love above all else.

The Heretic is a clone of Damian Wayne who was artificially created and matured to to serve Talia and the League of Assassins. However, even though he obeys Talia he has a burning hatred for Damian, who he sees as having all the memories of a childhood and the emotions of being loved, which he doesn’t have.

After confessing to Talia that he wants to be loved by her and have the memories that Damian has, he and Talia embrace in a hug. However she shoots him while in the embrace and she describes him as "Weak" and demands another clone be created without the defects that the Heretic possessed. Damian while in Talia's custody at the time was disgusted with his mother for killing him.

The Heretic is exceptionally loyal and merciless, obeying every command of Talia without question. Even after Talia slaps him for his disobedience, he prevents Onyx from retaliating on his behalf. His mere presence strikes fears into his enemies, reminding Batman of the nightmares he had of an evil Damian Wayne. Without a childhood and only created to kill, the Heretic knows only violence and destruction. The Heretic also has a high sense of honor as a warrior, being honored to meet his father Batman and displaying his heritage wearing a mask similar to Batman. Therefore, he could be seen as the physical manifestation of an evil Damian that Batman feared.

Despite his coldhearted and emotionless exterior, deep down the Heretic only wanted to be loved and to have fond childhood memories similar to Damian by stealing his memories. His describes his own existence as suffering, as he was born already an adult without a normal childhood with the sole purpose of killing. Having already reached adulthood without any childhood memories, he describes himself as without a soul, and obsessively seeks to remedy the issue by having a mother and son relationship with Talia.

Martial Arts: As a result of training with the League of Assassins, Heretic became a skilled fighter, holding his own against Batman, Batwoman, and Robin 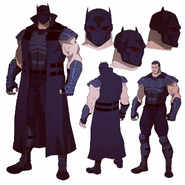 Concept art of the Heretic