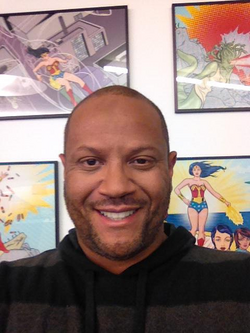 James Tucker is an american film producer. Tucker succeeded Bruce Timm as the head of DC Animation Original Movies in 2012 since Timm stepped down after The Dark Knight Returns animated movie in the same year. Tucker is the head producer to oversee the DC Animated Movie Universe (New 52 Animation) that started with Justice League: The Flashpoint Paradox at the end of 2013.

Retrieved from "https://dcanimatedmovieuniverse.fandom.com/wiki/James_Tucker?oldid=14920"
Community content is available under CC-BY-SA unless otherwise noted.