Metallo
Metallo was a cyborg enemy of Superman. He appeared as a hologram in The Death of Superman and on a newspaper cover in Reign of the Supermen fighting Cyborg Superman.

He was a former soldier who was dying until General Samuel Lane with help of LexCorp turned him into a cyborg powered by Kryptonite. General Lane then tried to destroy him when he became mad with power. He was eventually defeated by Superman and taken offline. 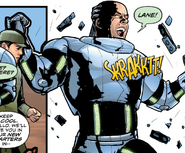