The Joker was a supervillain and archenemy of Batman. He’s currently imprisoned at Arkham Asylum (until he was supposedly killed by Batman in the Mobius Chair).

When Batman went to visit Killer Croc at Arkham Asylum with Jim Gordon, they passed by the Joker's prison cell. As lightning flashed, his shadow is shown with him laughing hysterically.

His image is displayed on the Batcomputer when Batman is closing the case on The Dollmaker.

Joker was kidnapped by Hush as leverage forcing Harley Quinn to work for him. He later was freed and set up so that Batman would discover him over Thomas Elliot's dead body. Enraged, Batman, assuming Joker had killed Elliot, nearly beat him to death, until Gordon intervened.

Joker was later seen as an inmate in Arkham during Batman's fight against Clayface, egging Batman and Gordon on while mock crying over Batman's "cheating".

Joker is a tall, thin man, with chalk white skin, red lips, green eyes and a head of bright green hair, which made him look like a clown. Joker was dressed in his trademark purple tailcoat and purple gloves, with an orange buttoned shirt and a green bow tie, a green vest, with a magenta flower attached to his tailcoat jacket. Joker also wore black and white dress shoes and matching purple pants. 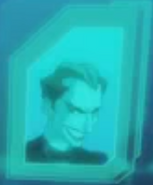