Robin Atkin Downes
The Electrocutioner was part of the Heretic's team. Their mission was to extract information and technology from Wayne Enterprise's business manager Lucius Fox. The team was intercepted by Nightwing and Robin. He was later killed by The Heretic for disobeying his orders when he tried to kill Robin. 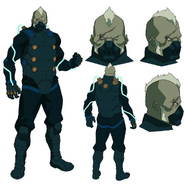 Concept art of the Electrocutioner