The Heretic
Onyx was right-hand woman to The Heretic, an adult clone of Damian Wayne. After the Heretic is killed by Talia al Ghul for desiring to steal the real Damian's memories, Onyx appears to burn with a silent hatred of Talia. After Talia managed to escaped into her auto pilot vessel, she attacks her master's killer on a hovercraft, leaving their fates unknown, presumably deceased. 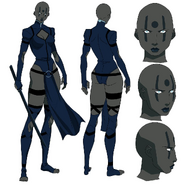