Reign of the Supermen is the thirteenth installment in the DC Animated Movie Universe and a sequel to The Death of Superman. It was released in limited theaters on January 13, 2019,[1] before being released on digital on January 15, and DVD and Blu-ray on January 29.[2], This film introduces a new Superman suit aswell, which could lead to the events of the rebirth era, it’s also the first film within the DCAMU to see the formation of the Superfamily. A direct sequel titled Batman: Hush released on August 6th 2019, that follows after this film.

An Extended edition of Death and Reign released in October 2019 titled "The Death and Return of Superman" with more footage, features etc.

Reign of the Supermen finds Earth's citizens – and the Man of Steel's heroic contemporaries – dealing with a world without Superman. But the aftermath of Superman's death, and the subsequent disappearance of his body, leads to a new mystery – is Superman still alive? The question is further complicated when four new super-powered individuals – Steel, Cyborg Superman, Superboy and the Eradicator – emerge to proclaim themselves as the ultimate hero. In the end, only one will be able to proclaim himself the world's true Superman.[2]

Six months following Superman's death after defeating Doomsday, four new versions of the hero appear: Superboy, Steel, The Eradicator and Cyborg Superman. Each one of them is different in their personalities and crime-fighting style compared to the original Man of Steel. Lois Lane, still reeling from Clark's death, decides to investigate.

Lex Luthor holds a press conference introducing Superboy as the true Superman, sponsored and bankrolled by LexCorp. Lois attends the conference, along with Steel, and sneaks inside one of the labs inside LexCorp. There Lois learns from scientist Dabney Donovan that Superboy is a clone of Superman. Suddenly, the conference is attacked by the Eradicator, who seeks to "eradicate" Luthor. Superboy and later Steel try to stop him, only to be defeated until the timely arrival of Cyborg Superman, who fights and drives away Eradicator. Many see him as the real Superman, angering Luthor. Lois writes an expose revealing Superboy to be a clone and asking if all of the Supermen are fakes. This leads to a meeting between her and Cyborg Superman, telling him she knows he isn't the Superman she knew and loved.

Luthor, angry that Superboy wasn’t declared the true Superman, forces Superboy to be security detail for the President of the United States. Superboy soon butts heads with the Justice League as the President arrives to launch the new Justice League Watchtower. A boom tube opens and Parademons terrorize the event. Superboy is defeated, but the Justice League hold their own while Cyborg Superman saves the President. The boom tube collapses and falls onto the League, appearing to have killed all of them. With Cyborg Superman declared the "real" Superman, Luthor, on the verge of injecting Superboy with a fatal substance, angrily reveals Superboy to be a clone of both Superman and Luthor himself; deciding against destroying the only viable Superman clone, Luthor instead unleashes the remaining failed clones to kill Donovan. While Cyborg Superman visits the grave of Terri Henshaw, he gets a message from Darkseid to begin. Lois and Irons learn of this visit, and discover that Cyborg Superman is really Hank Henshaw.

Cyborg Superman announces to the world his plans for creating the Cyber Corps, composed of regular people that he grants superpowers. Lois recognizes the technology as Apokoliptian and questions Luthor's involvement, as he has stolen the technology before. Steel confronts Intergang, Luthor's buyers of the tech, only to discover that they have been attacked by the Eradicator. Steel follows the weapons' signal to the Fortress of Solitude while Lois breaks into Luthor's penthouse and meets Superboy, who reveals he knew Luthor had previously intended to kill him, which has shaken his allegiance to his 'father'. Steel and the Eradicator fight while Lois and Superboy, and later Luthor, get a video call from the fight. Lois discovers the Eradicator is technology that protects Kryptonians, and realizes that the real Superman is inside the Fortress. Superman is revived and stops the fight. At the same time, Lois and Luthor see a broadcast from inside Cyborg Superman's mind, revealing Darkseid and his plans to invade, and that he orchestrated the deaths of both Superman and the Justice League in response to the failure of his previous attempt. Lois and Luthor form a plan just as Superman, Steel, and Superboy head to Metropolis.

Cyborg Superman begins the invasion, using the Cyber Corps to open a giant boom tube over Metropolis as Lois heads inside the Watchtower and reveals to Cyborg Superman that she knows who he really is. When the Watchtower reveals the real Superman heading towards him, Henshaw betrays Darkseid and closes the boom tube, stopping the invasion so he can personally kill Superman. He orders the drones to attack Metropolis just as Superman arrives. The battle is one-sided, as Superman’s not yet at full strength, and Cyborg Superman reveals he blames Superman for not being there to save him and his wife from the Excalibur space shuttle disaster. Luthor uses the Mother Box to free the Justice League, who were actually imprisoned in another dimension, to help Steel and Superboy defeat the drones. Cyborg Superman launches the Watchtower into orbit to prevent the League from aiding Lois and Superman. With Superman nearly defeated, Lois opens the Watchtower's window shutters so the sun's yellow rays shine on Superman, bringing him back to full power. Superman defeats Henshaw with help from his "wild card", the Eradicator, in the form of one of the Fortress' crystals which injects the Eradicator's program into Henshaw's brain and destroys him from within. With Cyborg Superman dead, the battle ends when the drones are deactivated, although all of the people who were turned into drones die in the process.

Weeks later, Clark Kent is revealed to be alive (with the cover story of having been stranded off grid during the Doomsday attack), and the real Superman, donning a new suit, is welcomed back to the world with open arms

In a post-credits scene, the League meet up at the Watchtower and agree to end the war with Darkseid by going to Apokolips. Luthor enters the watchtower inviting himself to the fight.

In August 2019, Warner Bros/DC Animation have announced an extended version of the Death and Reign films that will release on 2019 titled "The Death And Return Of Superman", the film will contain new footage, extras and more. [3] 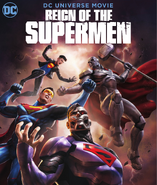 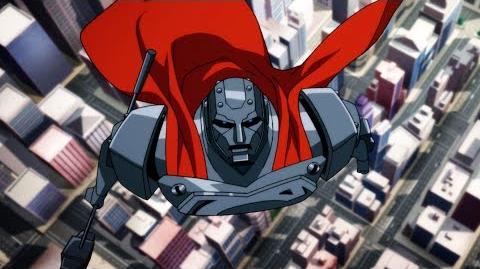 Reign Of The Supermen - Official Trailer 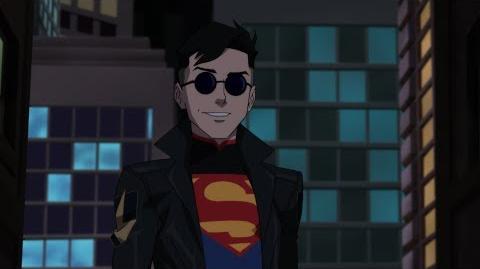