This is also the first film to have Damian Wayne's character arc that begun with this film and concluded on Justice League vs. Teen Titans.

Batman learns he has a son, Damian – and to further complicate matters, the mother is Talia al Ghul, daughter of one of his most dreaded enemies, Ra's al Ghul. When the odds quickly turn against Batman and Damian, Batman must become both father and mentor to the aggressive, agile new Robin. Together they form an uneasy alliance to try and thwart the criminal enterprise of Deathstroke and his army of Man-Bats before there are international consequences.[1]

The film opens at the headquarters of the League of Assassins, in Nanda Parbat where Ra's al Ghul is grooming his preteen grandson, Damian Wayne, to someday succeed him as the League's head. Suddenly, the League is attacked by a group of assassins led by Slade Wilson; a man whom Ra's thought would be a worthy successor until he became aware of Bruce Wayne's reputation as Batman. Though Batman refused to join Ra's and they have become enemies, Ra's daughter, Talia, conceive Damian with Batman after they have become romantically connected. Raised under Ra's family's care and without his father's awareness, Damian is trained to be the ultimate assassin for the League to eventually follow when he comes of age, leading a jealous Slade to feel betrayed, prompting him to try and take over the League with an army of highly trained assassins. During his battle with Deathstroke, Ra's is fatally burned in an explosion, prompting Damian's wrath; he stabs Slade in the right eye in the ensuing swordfight. As Slade flees, Ra's tries to reach the Lazarus Pit, which is able to revive/heal a dying person while giving them short-term madness, but dies before he can touch its waters. Talia then decides to take Damian to Gotham City to inform Batman of the situation.

In Gotham, Batman confronts Killer Croc, who has become addicted to steroids and grown a tail using mutagens. Croc nearly kills Batman, but is subdued by Talia. She informs Batman of her father's death and reveals their son's existence to him. Talia leaves Damian in Batman's care, hoping to protect him from Slade as the assassin aren’t aware of Batman's identity or their romance. During his stay, Bruce recognizes that Damian is skilled. Damian harbors desires to avenge Ra's al Ghul's death by killing Slade, which Bruce immediately objects to, telling Damian never to kill.

Ra's had previously employed Dr. Kirk Langstrom to recreate and improve his Man-Bat formula. Slade, now calling himself "Deathstroke", captures Langstrom, along with his wife and daughter, and forces him to hasten his work. Meanwhile, Batman gets a lead from Killer Croc about the source of the mutagen, Langstrom's apartment. There, he finds a mutated ape-like creature and defeats it before the building is hit with a drone strike. After extinguishing the fire with a water tower, Bruce recovers a shuriken as the only piece of evidence, deducing Deathstroke's involvement. Elsewhere, Talia leads an attack on Deathstroke, but is captured.

Against Batman's orders, Damian leaves the Batcave and hunts down Ubu, one of Deathstroke's minions. Damian gets no information on Deathstroke's whereabouts, though he brutally beats Ubu. Before Damian can kill him, Nightwing arrives and intervenes, mistaking him for a criminal. He defeats Damian and brings him back to the Batcave, though Nightwing himself receives a few injuries from Damian's sword. Batman berates Damian for his recklessness, willingness to kill and exposure of their investigation, telling Damian to control his desire for revenge as Bruce does everyday, doing what’s right rather than easy. Batman decides to make Damian the new Robin in order to discipline him. Aided by a tip from Commissioner Gordon, the two head to an abandoned stadium from which Deathstroke's assassins are believed to be operating.

At the stadium, Batman and Robin question Dr. Langstrom but are exposed when Damian is quick to resort to violence and are attacked by several Man-Bats along the way. Back in the Batcave, Dr. Langstrom reveals that Deathstroke wants to use the Man-Bat formula to create super-advanced, flight-capable assassins. While Nightwing works with Dr. Langstrom on a cure for the formula, Batman and Robin fly to a castle in Asia to rescue Dr. Langstrom's family. During the rescue, Batman deduces Talia's abduction after finding signs of torture in an empty cell but doesn't tell Damian. Deathstroke has Langstrom's daughter discreetly give Robin a message in exchange for her life and that of her mother's, giving Robin his location for their fight and 48 hours until Talia's death.

Nightwing learns that Deathstroke is operating in an oil rig off the coast of the United Kingdom. While Batman’s distracted by a conversation with Nightwing, Robin heads to the oil rig to find Talia. He eventually finds both her and Deathstroke in a cave below the bottom of the ocean, along with a swarm of resting Man-Bats and another Lazarus Pit; the oil rig is being used to pump it's fluids to sell. Robin pulls out a gun to kill Deathstroke, who holds one against Talias' head in response. Robin drops his weapon, but as Deathstroke fires his own gun at Robin, Talia leaps out and takes the shot, telling Damian to run. Just as Deathstroke corners Robin, Batman intervenes and Deathstroke orders the Man-Bats to attack. Batman wards them off with several sonar-emitting devices and Deathstroke flees.

Robin chases after Deathstroke and Batman takes Talia into the Lazarus Pit. Nightwing and Dr. Langstrom arrive in the Batplane and cure the Man-Bats of their mutations. Robin ultimately defeats Deathstroke, but refuses to kill him, calling himself his father's son. A swarm of Man-Bats overcrowd the elevator between the platform and Deathstroke's underwater base, destroying it and causing a flood. Talia, Bruce and Damian leave via an escape pod and are rescued by Nightwing. Deathstroke drowns. Batman and Talia argue over custody of Damian, but Talia ultimately decides to let Batman take their son in and make him great. Batman and Robin watch as Talia leaves with the League of Assassins with Damian insisting he drive the Batmobile to which Batman rebuffs his pleas.

The credits are inter-cut with stills of Damian's fight with Dick. 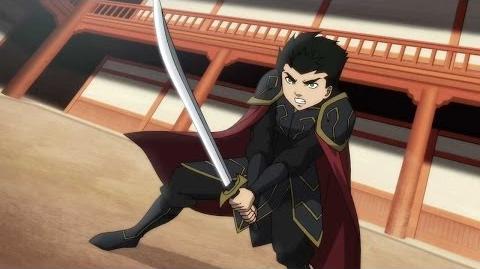 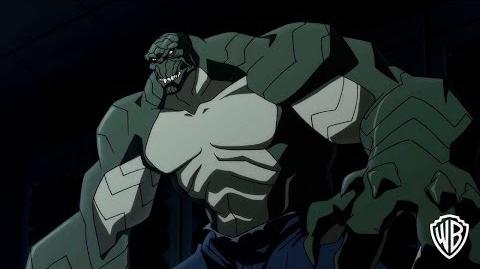 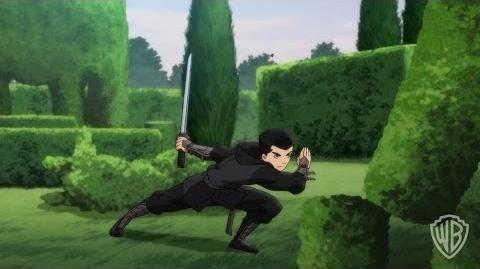 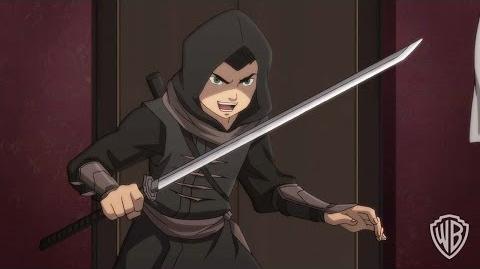 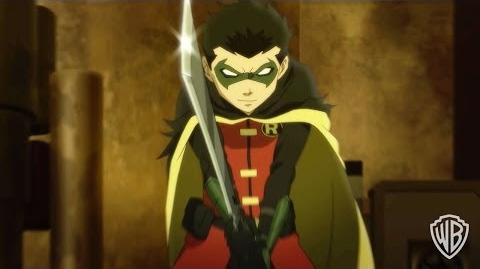 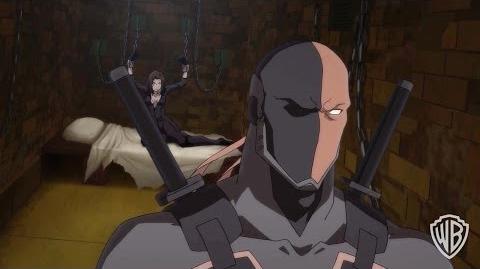