Suicide Squad: Hell to Pay is the tenth installment in the DC Animated Movie Universe. It was released digitally on March 27, 2018, and on DVD and Blu-ray on April 10, 2018. It’s also noted that this is the first film of the DCAMU where it comes "full circle" as it connects to Justice League: The Flashpoint Paradox.

This is the first film in the DCAMU to feature the Suicide Squad, but the second film in the DC Animated Original Movies following Batman: Assault On Arkham.

Following Ocean Master's defeat at the hands of the Justice League, Amanda Waller dispatches Task Force X, consisting of Deadshot, Count Vertigo, and criminal couple Punch and Jewelee, to recover a flash drive containing leaked intelligence from Tobias Whale. The mission succeeds, but Vertigo and Jewelee betray the team and kill Punch. Having become lovers in jail, they plan to copy the flash drive and sell it once their time is served; but Waller, overheard everything through Deadshot's communicator, detonates Vertigo's head bomb and Deadshot mercy-kills Jewelee.

In Present Day Gotham City, Professor Pyg is kidnapped by Scandal Savage and Knockout for a "patient in need of medical attention". Waller discovers that she is diagnosed with a terminal illness and reassembles Task Force X with a new roster: Deadshot, Harley Quinn, Captain Boomerang, Killer Frost, Copperhead, and Bronze Tiger. Their mission: to find a man named Steel Maxum and retrieve a mystical black card emblazoned "Get Out of Hell Free."

Finding Maxum in a male strip club, Task Force X battles Professor Zoom, Silver Banshee, and Blockbuster. The squad escape with Maxum and learn he was Doctor Fate. He explains that the card allows the user to skip Hell and gain access to Heaven, but it can only be used once. Scandal and Knockout stole the card from the Tower of Fate, which resulted in Maxum being stripped of his title by Nabu.

Upon finding Scandal and Knockout's apartment, the team acquires the card, but they’re intercepted by Vandal Savage and his men. Savage retrieves the card but leaves the wounded Knockout to die despite Scandal's pleas. As Savage escapes, Zoom places a tracer on his ship. Deadshot visits his estranged daughter Zoe but is forcibly retrieved by Tiger. Next day, Zoom's henchmen kidnap Frost at a gas station. Zoom removes Frost's bomb and convinces her to join him. Zoom lures the Squad into a trap and detonates the bomb. They manage to escape, but Tiger is heavily injured in the blast.

Scandal covertly informs Deadshot of Vandal's location, and the Squad infiltrates his lair but are captured. Savage reveals that he had Pyg surgically implant the card into his chest cavity. Zoom and his henchmen attack and remove the card from Savage's body, killing him. Zoom explains that he was killed by Batman in another timeline, but managed to stay alive by calling on the Speed Force. Frost double-crosses Zoom, killing Silver Banshee and Blockbuster by freezing their insides and stealing the card for ransom. Copperhead fights Frost until Waller detonates his bomb and kills them both. Captain Boomerang attempts to steal the card but is incapacitated by Zoom.

Tiger battles Zoom, but Zoom slices him multiple times with a small dagger. Tiger, dying from blood loss, uses the last of his strength to cut the card from Zoom's fingers. Deadshot kills Zoom and gives the card to Tiger, who dies and ascends to Heaven. With only Harley Quinn and Captain Boomerang remaining alive in his team, Deadshot gives the now-useless card to the unsuspecting Waller before leaving. Having served his time, Deadshot visits Zoe as a free man. 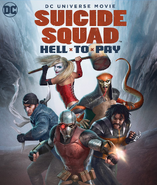 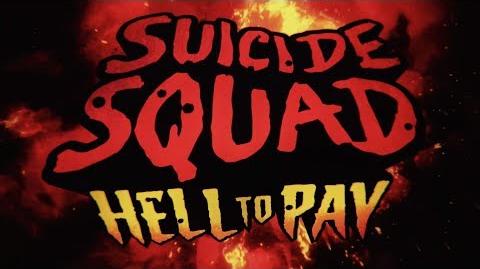