The Death of Superman is the eleventh installment in the DC Animated Movie Universe. It was released digitally on July 24, 2018, and on DVD and Blu-ray on August 7, 2018. A sequel, Reign of the Supermen, was released in January 2019.[1], An Extended version of the two-parters was released in October 2019 titled "The Death And Return Of Superman"[2]

The Death of Superman ultimately finds Superman in a fight to the finish when the Man of Steel becomes the only hero who can stand in the way of the monstrous creature Doomsday and his unstoppable rampage of destruction.[1]

Superman has become a hero to the citizens of Metropolis while infuriating billionaire and super villain Lex Luthor, who considers our hero a threat to his city and he hates all and every heroes. In an attempt to kidnap the mayor, Intergang – armed with Apokolips technology, including the Mother Box – are foiled by Superman; he and the Justice League send the recovered devices to S.T.A.R. Labs for analysis. In an interview with the Daily Planet’s ace reporter Lois Lane, Superman presents the rocket that brought him to Earth from Krypton and its birthing matrix, containing Kryptonian DNA technology to the world. Lois is in a relationship with fellow reporter Clark Kent who, unbeknownst to her, is Superman’s alter-ego. Despite meeting his parents Jonathan and Martha, Lois remains apprehensive of Clark's secrecy. His reluctance to reveal his past makes Lois reconsider their relationship.

At S.T.A.R labs, Silas Stone and Dr. John Henry Irons determine Intergang’s devices contain both Apokoliptian and Earth elements, leaving only one suspect with the means to synthesize these technologies: Lex Luthor. Superman confronts Luthor, confined to house arrest, who denies any involvement. Meanwhile, Superman admirer Captain Hank Henshaw leads a team of astronauts aboard the space shuttle Excalibur when a boom tube sends a meteorite hurtling towards the shuttle. As Henshaw waits for Superman's rescue, the shuttle is destroyed, leaving Henshaw's body unaccounted for. The meteorite crashes to the Atlantic Ocean floor, monitored by Luthor’s underground research facility. Luthor escapes his house arrest with a decoy and sends a deep sea exploration team to the crash site. They encounter Atlanteans, and both groups are destroyed by a monstrous humanoid that emerges from the wreckage.

The monster reaches the U.S. coastline and murders two campers and a grizzly bear before rampaging against the police. The Justice League arrive and are brutally defeated, but the Martian Manhunter’s telepathy reveals the creature to be a living weapon designed to annihilate entire civilizations. As the monster heads for Metropolis, Batman notes that their last hope is the Man of Steel. Meanwhile, Clark and Lois meet for lunch at a restaurant owned by Superman fan Bibbo Bibbowski, where Clark finally reveals himself as Superman to a shocked Lois. The two resolve their differences, and Clark receives the Justice League’s distress call. He arrives just in time to save Wonder Woman from the rampaging creature.

Lois, reporting live by helicopter with her cameraman Jimmy Olsen, dubs the monster "Doomsday" as his fight with Superman rages through Metropolis and reaches the Hall of Justice. A battlesuit-clad Luthor joins the fight against Doomsday, aiming to become Metropolis’ “true savior,” but he is incapacitated and saved by Superman. Realizing the toll the battle has taken on Superman, Lois attempts to sacrifice herself to Doomsday to force Clark into using lethal force. As the beast prepares to kill Lois, Superman hurls himself at Doomsday – he breaks the villain’s neck, but is fatally stabbed at that moment, and dies in Lois’ arms.

Jimmy broadcasts Superman's death across the globe as the world mourns. After a state funeral for the fallen Man of Steel, the Kents welcome Lois into their family. Jimmy brings Lois to Superman's mausoleum where they find his coffin open and witness a figure resembling Superman fly away. At S.T.A.R. Labs, an exonerated Luthor tries to gain custody of Doomsday's corpse for Project Cadmus before Superman's rocket self-starts and flies off.

Four mysterious figures are introduced during the ending credits: First, as numerous failed Superman clones are destroyed at Cadmus, the sole surviving prototype escapes. Second, Dr. Irons forges Superman’s symbol onto a suit of armor. Third, a Superman-like figure watches as Superman's rocket buries itself under the North Pole and terraforms the Fortress of Solitude. Lastly, high above the Earth, a cyborg resembling Superman arrives. 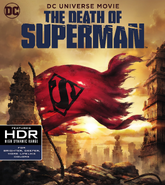 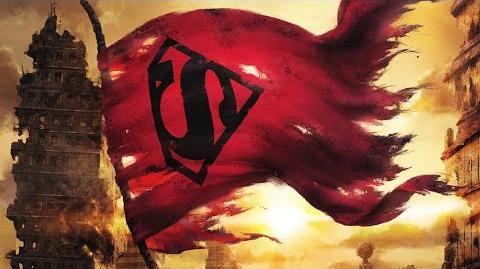 The Death Of Superman - Official Trailer